McDonald's Maestro Ben Wellham reviews a plethora of bangin' burgers in the city renowned for having the best McDonald's in the world!

As a self-professed connoisseur of the finer things in life (burgers, hotdogs, street meat etc.),  I knew my time in Hong Kong would involve one or two McDonalds. However, my time in the UK did not prepare me in the slightest for the special range here.

I first became aware of what was in store one morning on the MTR, when a well placed seductive burger advert caught my eye. It was minimalistic and classy, the second term not always associated with an establishment like McDonald's, but trust me this advert oozed it. I was captivated. I snapchatted all my fellow McDonalds loving friends a picture of the advert and was met by pure shock, envy and awe. I was hooked, like a moth to the moon, like a puppy to some fox poop, I had to try it. And by ‘it’, I mean ‘everything on the special menu’. Here’s what I found:

Plain Angus
In the UK, the Angus range is a term exclusive to Burger King, so I was intrigued to see what McDonald's could do with some ‘Angus standard meat’. And boy Ronald did not disappoint with a much thicker patty than one you would find in any of their other burgers, maybe triple the depth of a big mac (but I didn’t bring my tape measure so don’t quote me on that). The meat was succulent and cooked excellently. A delicious standard burger for the ‘special’ range; you can genuinely tell the difference. The burger is quite rich, with buttery undertones perhaps coming from the cheese and brioche bun. I understand this is the ‘vanilla’ burger in this special range but perhaps they could have made a slightly adventurous mayo. 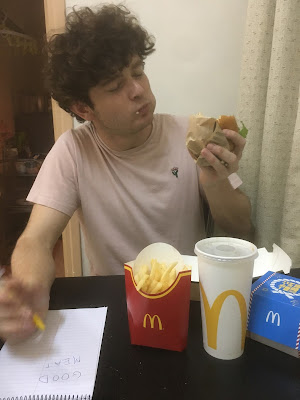 Bolognese Burger
There is only one way to describe the way you must approach this burger. You gotta get down and dirty with it. Structural integrity is tested with ingredients such as bolognese sauce, an egg and salad cream all being poor building materials so eating it can get kind of messy. No matter, I fear no burger and was willing to take it on. As for flavour, I think It might be one of the best specials McDonald's has to offer, or at least that I have tried. The bolognese was a decent standard - if my mother had presented it to me I would have been pleased, however, she is vegetarian so has never cooked a good one in her life (sorry mum, quorn just doesn’t cut it). I was apprehensive about the egg. I believe eggs only really have a place in ‘breakfast burgers’, however, the egg was well cooked (for McDonald's) and complemented the bolognese excellently. The salad cream acted as a slightly sweeter mayo, perhaps to counteract the richness of the bolognese and fitted in well. The brioche buns were a nice touch, but not a game changer- standard sesame would have sufficed.


Improvements:
- Bacon. It makes every burger better let's be honest.
- Replace the cheese with mozzarella. The Bolognese will overpower whatever plastic cheese McDonald's are going to use anyway.

Cheesy Champignon Burger
Now for the ‘Cheesy Champignon burger’. I was buzzed to see this on the menu.  I love cheese and having the term ‘cheesy’ and ‘champignon’ in the name was getting me more than a little excited. Finally, a burger with a good proper french cheese. A burger from McDonald's where the cheese can share the spotlight. A burger with… plastic cheese. Ronald had let himself down. Mushrooms don’t exactly pack a punch when it comes to flavour so to see them complemented by a weak cheese was frankly disappointing. Seeing as the burger was called the ‘Mushroom cheeseburger’, I thought it would allow McDonald's to be a bit adventurous and use a more powerful cheese as the focal point to this burger, such as a gruyere or even an emmental but no, it wasn’t meant to be.
For meat quality please see: ‘Standard Angus Burger’.

Crispy Pork Cutlet & Fried Onions
Now pork burgers aren’t really a thing, let’s be honest. But as a concept, I don't necessarily disagree with it. It’s forward thinking and replacing the usual culprit chicken in a battered burger with pig makes sense… kind of.


Anyway, to the burger, it’s very simple with two main components: crispy onion and crispy pork, a dynamic duo which complements each other perfectly. The pork cutlet was an actual cut of pork, not like the reformed mess you find in a McMuffin (I was pleasantly surprised by this). The onions are what makes this burger though. Dainty strands of onion delicately battered and fried bring TNT to this burger (texture and taste). Deep fried onions come into the God tier of food for me and these ‘onion strings’ are excellent considering they are from McDonald's. The last part of this burger is a small smattering of slightly seasoned mayo on top, much needed in this burger containing a couple of dry components.


Rating: 7/10
Improvements:
- Could have caramelised the onions in apple cider vinegar to pay homage to the classic dynamic of pork and apple.
- Season the pork or the batter lightly. 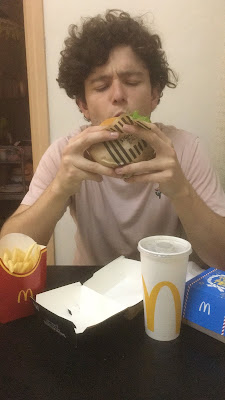 So there we have it, a resounding victory for the bolognese burger! Just remember, if you're going to get on the bologenese burger bandwagon, you gotta get down and dirty with it.
Labels: A day in the life beauty CNET Daily Life education explore food foodie HK McDonalds poetry travel guide 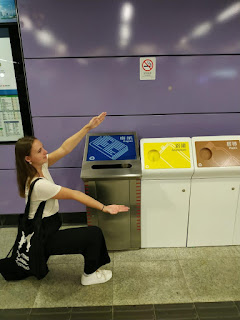